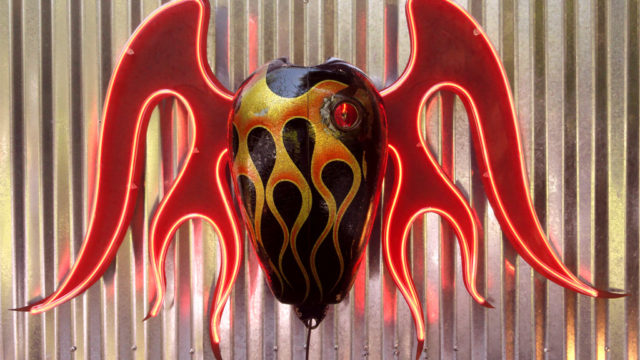 Trident Angel neon sculpture began life in Meriden England in 1971.
Steel was forged, welded and painted to become a fuel tank for the legendary Triumph T150 Trident motorcycle.
The 1970’s proved to be a glorious age for gasoline and glitter.
With a healthy dose of glam landing on this Trident as it speed through the decade.
Love of excess guided the curator of this customization as sparkling golden flames lick the sensuous curves of Triumph pedigree.

-a little triumph trident history–
The Triumph 750 triple cylinder motorcycle is arguably the world’s first superbike.  Trident engines were built in the late 60’s and early 1970’s, were designed in the mid 60’s with origins in the Triumph Speed Twin of 1937 designed by Edward Turner.
Tridents were one of the most successful race bikes of their time, dominating the 750cc races in Europe and in the U.S.  In the early Seventies, Trident triples scored wins at tracks such as Mallory Park, Brands Hatch, Le Mans, Talladega and Thruxton.   At their first Daytona outing in 1970, Tridents took the top three qualifying speeds, with a high speed of 165.44 mph, finishing in second and third place.  In the 1971 Daytona race, Tridents finished first, second and third.  First place went to Dick Mann, who had won the previous year on a Honda.
Subsequent racing seasons notched up dozens of victories at the hands of riders such as John Cooper, Ray Pickrell and Percy Tait.
Perhaps the most famous racing Triumph was the production racer nicknamed ‘Slippery Sam.’  This race-prepared Trident took fourth place in its first year at the Isle of Man Production TT, and won first place in the next five consecutive Isle of Man races (1971 to 1975).
In the 1990’s, Jon Minonno piloted Trident powered machines to set numerous land speed records at Bonneville Salt Flats.  One such motorcycle built by Minonno and Ed Mabry, utilizing two triumph engines with a combined output of nearly 500hp, reached the astonishing speed of 262mph.
In September 2008,  Tom Mellor set four new world speed records at Bonneville with a 1969 Triumph Trident T150.

The Trident 750 pilot lived for this experience.
Knees gripped the slender tank, locating, communicating, and hanging on.